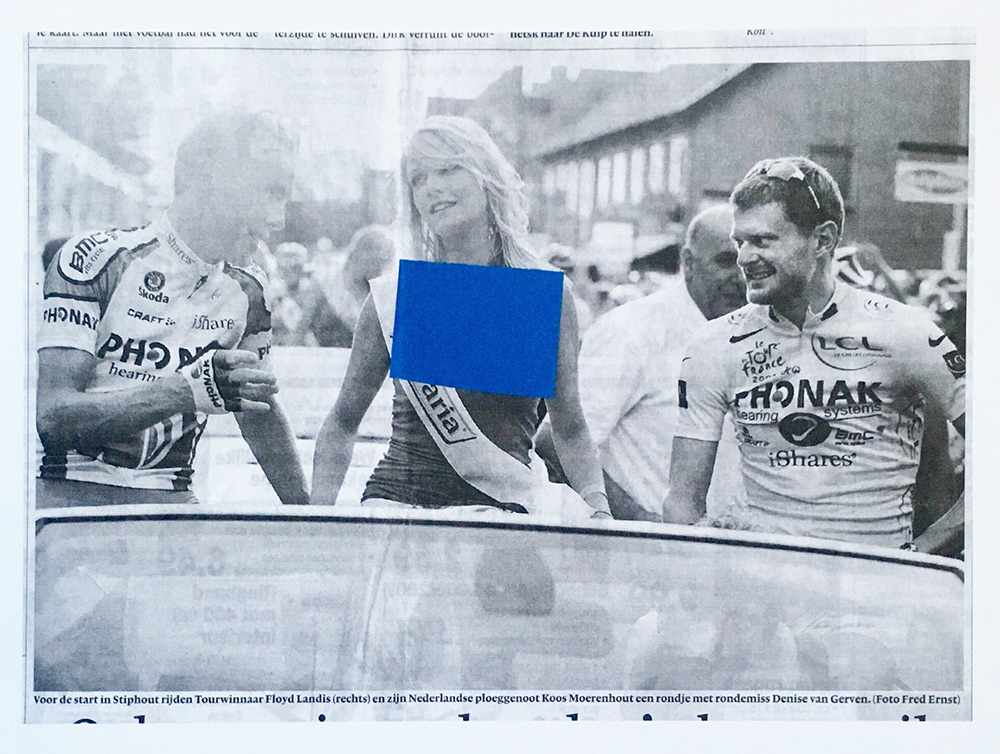 P.A.R.A.S.I.T.E. Institute Artist Book Collection is one of the central international collections of the Artist Books in the country and therefore also a suitable subject of study. It was created from the first donations and exchanges in 2003, and today comprises more than 600 units of Artist Books, fanzines, journals, and Artist’s magazines. The current time seems especially appropriate for rethinking who we are and how we live. The exhibition Parallel Literature was created in the face of current social developments which are marked by general dissatisfaction with political elites, repressive measures, censorship, and fake news. Selected publications from the collection have been created in different contexts, environments and periods, but all of them address – directly or indirectly – topics of political power and political authority.

Censorship Daily (2012) brings a selection of pages from the NRC Handelsblad daily. Jan Dirk van der Burg collected images from the newspaper (2007-2012) that had been delivered to his friend Thomas Erdbrink while living in Tehran. This Dutch newspaper was checked by a group of Iranian officials each time before delivery. They carefully covered the obscene parts of the photographs, the exposed body parts, with a ruler, scissors and stickers. The images intentionally remain black and white, while the censorship label is vivid blue.

In his book Contemporary Brazilian politics (2011), Erik van der Weijde shows excerpts from newspaper texts he collected over the years. Comments on political corruption predominate. The annual cost of corruption in Brazil is estimated at about five trillion US dollars. On a black background, in a simple sans-serif font, we can follow the text without a beginning and end, as a set of statements, without any names. The message is thus even stronger and shows a revolt against the regime, emphasized by alarming facts and figures.

Lucky Pierre is an art group from Chicago. In 2012, it issued 100 Actions for Chicago Torture Justice, a publication representing a response to the inconceivable forms of aggression and torture inflicted by the Chicago police on the black population between 1972 and 1992. Documentary material was collected over several years. It was used to draw attention to concrete cases of crimes and stimulate a public debate on the issue of torture, its structures, practices, and consequences. The project was of a participatory nature, anyone could contribute an action online on their website.

The form of Siniša Labrović’s Postgraduate Education (2009) resembles the popular self-help manuals. The book is divided into fourteen chapters, each dealing with one criminal activity such as theft, prostitution, drug trafficking, extortion, corruption, and ends with politics. Each is systematically described and equipped with useful tips. The publication is a cynical commentary on the demand for lifelong learning and questions applicability of knowledge. On the other hand, it highlights the blurred boundaries between business, politics, and crime. The drawings in the book are the work of Igor Hofbauer.

Letters 2004-2006 (2007) is the work of Martin John Callanan. It contains letters – or replies to his letters sent to representatives of the authorities and power structures. He sent a request to British political leaders and representatives of the royal government asking them for confirmation that they still exist (Confirmation That You Still Exist), a statement I Respect Your Authority to 268 world presidents, and to more than a hundred religious leaders the question When Will It End? The collected answers represent different responses, some seem bizarre and unrealistic, and sometimes the question of meaningfulness of these answers arises.

Jan Dirk van der Burg (1978, The Netherlands) deals with photography and film and the medium of the Artist Book. He lives and works in Amsterdam.
Martin John Callanan (1982, UK) is a conceptual artist working in London and Scotland. He is engaged in researching the position of the individual within different systems. He creates in various media.
Siniša Labrović (1965, Croatia) is an artist who creates in the fields of performance, body art, video, and photography. He has carried out several activist-oriented projects in public spaces and galleries.
Lucky Pierre (USA) is an art group from Chicago working in the fields of performance, writing, education, events, and activism. They have been creating collaborative and participatory events since 1995.
Vlado Martek (1951, Croatia) is a former member of the conceptual group The Group of Six Artists (1975-1984). He creates works and anti-works, assemblage, handwritten texts in which he reflects on society, politics, and ideology.
Peter Tillessen (1969, Germany) is known as a photographer, but he also often works with the medium of the Artist Book. He lives and works in Switzerland.
Erik van der Weijde (1977, The Netherlands) is a photographer and is very active in the field of the Artist Book. He runs the 4478ZINE publishing house. He lives and works in Brazil.