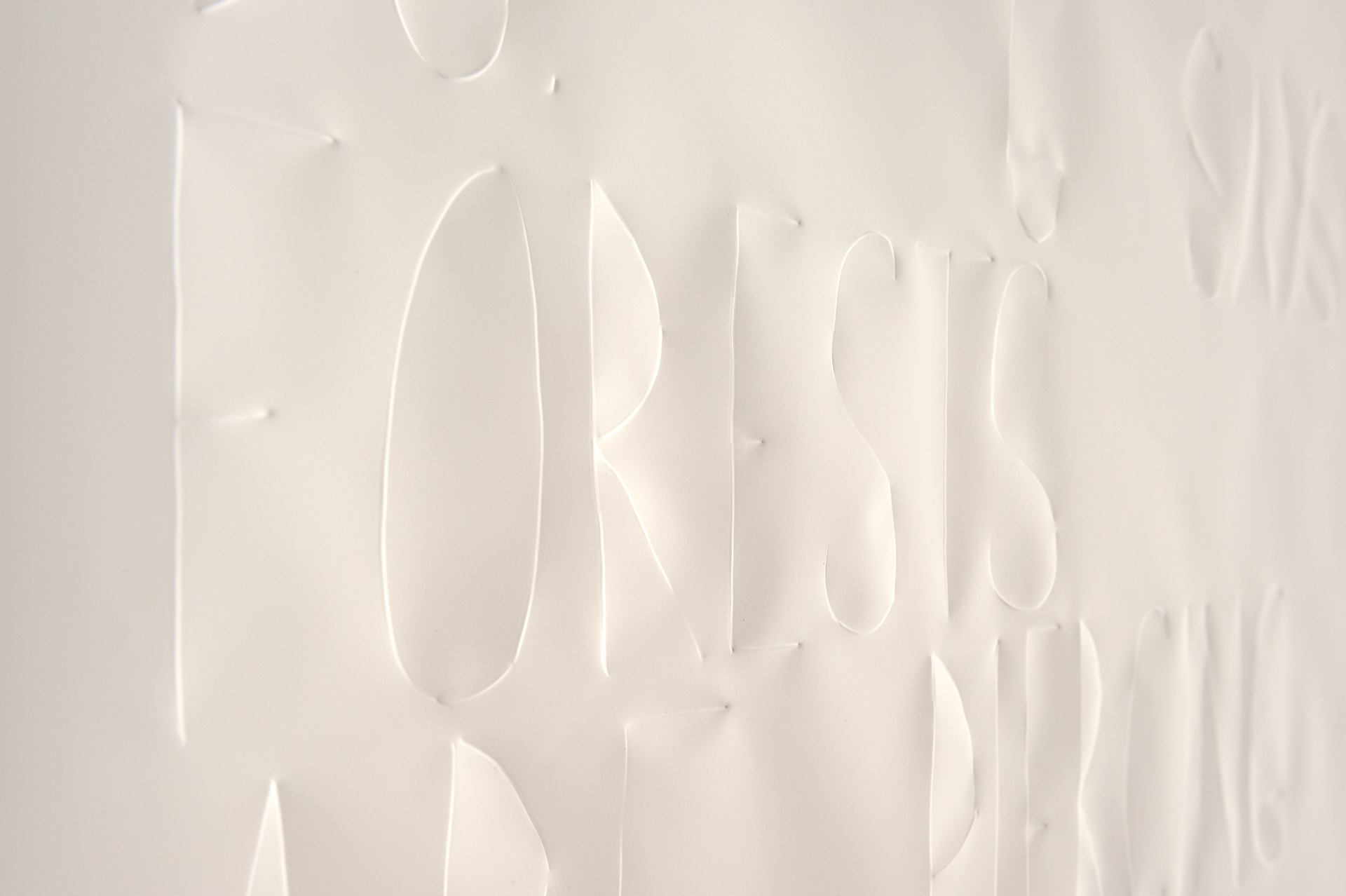 Nežka Zamar’s creative process begins with research – observation, documentation, and reinterpretation are then deepened through her work with different media. She understands herself as a translator of the stories that surround us, so she delves deeply into the subject. This allows her to understand it in new contexts and find new connections. She mostly creates with found objects. Borders are a constant in her artistic practice. She analyses them with a focus on their potential shifts. She is interested in the interspaces that arise between physical materiality and the conceptualization of an idea. At the exhibition in the P74 Gallery, the artist presents the continuation of the project she started last year at her residence in the Dolomiti Contemporanee (Italy).

In the project Sequence of Spaces II, Nežka Zamar intertwines visual art with literature or language and linguistics. The work can be linked to the tradition of visual and concrete poetry where the boundaries of the verbal are upgraded in the visual, but the author also deals with the question of what a book can be. The project is materialized in a spatial installation, made especially for the gallery space; it is a site-specific work. It contains several sheets of paper that act as a wall, and text is engraved on them. Each sheet (including the text) acts as an individual and independent piece, and at the same time, due to the layout, the installation can be read in several directions; horizontally and vertically, with arbitrary cuts and finishes. The viewer moves inside the illuminated installation; between the walls, which not only allows for different views on the visuality of the work but highlights an open form of reading. The latter does not have a predetermined content and interpretation; also, various languages ​​and linguistic laws are used. The artist plays with the ambiguity of the perception of materiality as the paper she uses is not made of cellulose but of stone. She thus builds a contrast between the firmness of the base material from which the artwork is made, the construction of a wall that acts as something stable, and the lightness, flexibility, and sensitivity of paper. The text record itself does not cut the surface of the paper but rather interferes with the material and creates creases. The element of the wall as something that delimits space emphasizes the concept of division, the relationships that are established through it.

Along with the spatial installation, there are three more pieces from the series Directions (An Attempt at Transparency) (2022), in which the author focuses on the boundaries of painting and literature by highlighting their basic elements. She intertwines traditional techniques with new technologies, both in concept and materiality. Transcription of found digital records and text messages becomes the basis for works on paper which are placed in illuminated frames made with 3D printing technique. Because the paper is creased, the layout and lighting change the readability of the characters/letters while the changing content in the frame indicates the distance between the author and the found subjects.

In these projects, Nežka Zamar researches the perception of text within the visual, and above all, she emphasizes the complexity of language, as well as practices of reading and reading the meaning. She skilfully uses the element of physical delimitation within works of art to open up questions about the multifaceted nature of meaning, while with the light she achieves the impression of the intangibility of what is written.

Nežka Zamar (1990) is a visual artist born along the Slovenian – Italian border. She graduated in painting from the Academy of Fine Arts in Venice (2013), continued her studies at Mimar Sinan Fine Arts University in Istanbul (2015), and completed her master’s degree in Venice (2018). She continues to collaborate with Atelier F, the Venetian Academy’s art studio and is an active member and one of the founders of the Fondazione Malutta art collective. Since 2021, she has been exhibiting regularly, individually and in groups, and at the same time has been organizing projects and workshops in the international art space. She lives and works between Ljubljana and Venice. Her major exhibitions include La Torre Maluttona e Il Mercato Babelico, Monitor Gallery, Rome, Italy, Il Gemello Cativo, Museo Santa Maria della Scala, Siena, Italy (2018), Collezione Malutta and Black Market, Monitor Gallery, Rome, spatial installation and presentation of the book as part of the Mediterranea 17 Young Artists Biennale, Tirana (2017), and Fondazione Malutta meets the Albanian Pavilion – a collaboration with the Albanian Pavilion at the Venice Biennale of Architecture (2016).