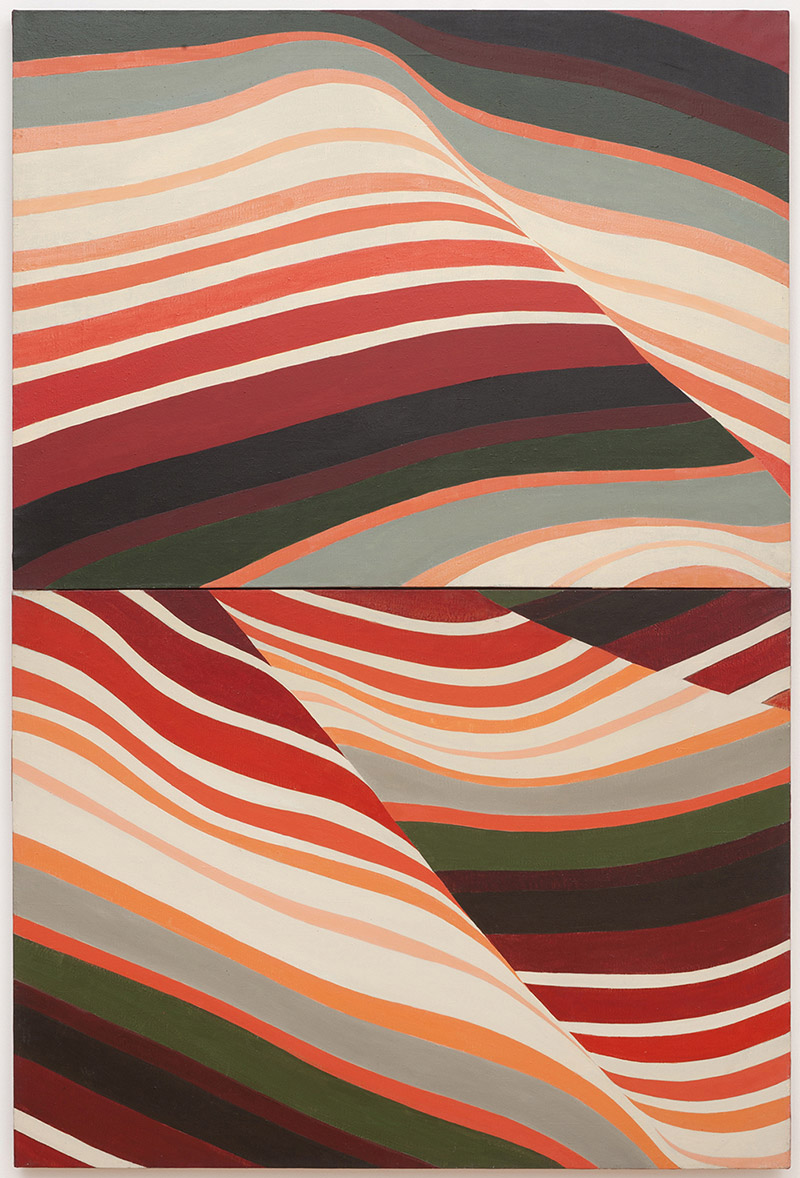 P74 Gallery proudly presents a dialogue of four innovative contemporary artists, key representatives of the generations of the 70’s, 80’s and 90’s. All of them are dealing with complex issue of social and political relationships. Laibach Kunst uses strategies of retro-avantgard in their cross media projects. Milena Usenik is one of the leading pop and op art artist. Tadej Pogačar is an inventer of the new parasitism, researching relations between individuality and social systems. Sanja Iveković is one of the most important contemporary visual artist. Her generation of the 70’s in Yugoslavia questioned the role of art in society and took the streets through performances and the use of cheap, accessible materials. In her work she tackle issues as female identity, media, consumerism, and politics.

Milena Usenik produced between 1971 and 1976 exceptional opus of paintings that represents unique hybridity between pop art and op art and stayed mostly overlooked. Pop art was in Yugoslavian created in completely different societal, political and social conditions than on the West. In a unique way, these works represent a critique of the consumer society and its representation, as well as the thematization of selected political issues. One of the popular methods of pop art was the appropriation of sexualized representations of the female body, which dominated in the imagery of public media. She has presented her works on a number of solo and group exhibitions localy and internationaly.

Laibach is well known cross-media collective, founded in 1980. They started their artistic activity as visual artists. The name Laibach (Austro-German for the capital city Ljubljana) as well as the group’s propagandist manifestos have raised numerous debates on their artistic and political positioning. In their work they are creatively questioned artistic quotation, appropriation, copyright. Laibach started out focussing on the 20th century totalitarianisms. The key to this postmodern strategy of sampling is to be found in the term Monumental Retro-Avangarde, coined by Laibach.

Sanja Iveković is one of the most important contemporary visual artist. Her generation of the 70’s in Yugoslavia questioned the role of art in society and took the streets through performances and the use of cheap, accessible materials. In her work she tackle issues as female identity, media, consumerism, and politics. Structure – Book is an artist’s book which is directly connected to the work Struktura (Structure) (1975–1976), which was comprised of ten newspaper clippings of images of women, cut out from daily newspapers and magazines. Each image of a woman was repeated ten times in the work, each time with a different caption. The order in the work was founded on the visual thinking directly alluding to constructivist tendencies which were characteristic in the medium of painting at that period.

Tadej Pogačar, an artist, curator and educator, is founder and director of the P.A.R.A.S.I.T.E. Museum of Contemporary Art, a virtual organization established in 1993. As a parallel institution, it serves as a critical model for analysing systems and the institutions within them. Tadej Pogacar is closer to a cultural/social activitist than to a creator of autonomous artworks, examining indeterminacy and transformation within social systems. He engages in interventionist logic and critical research as well as participatory and collaborative projects.