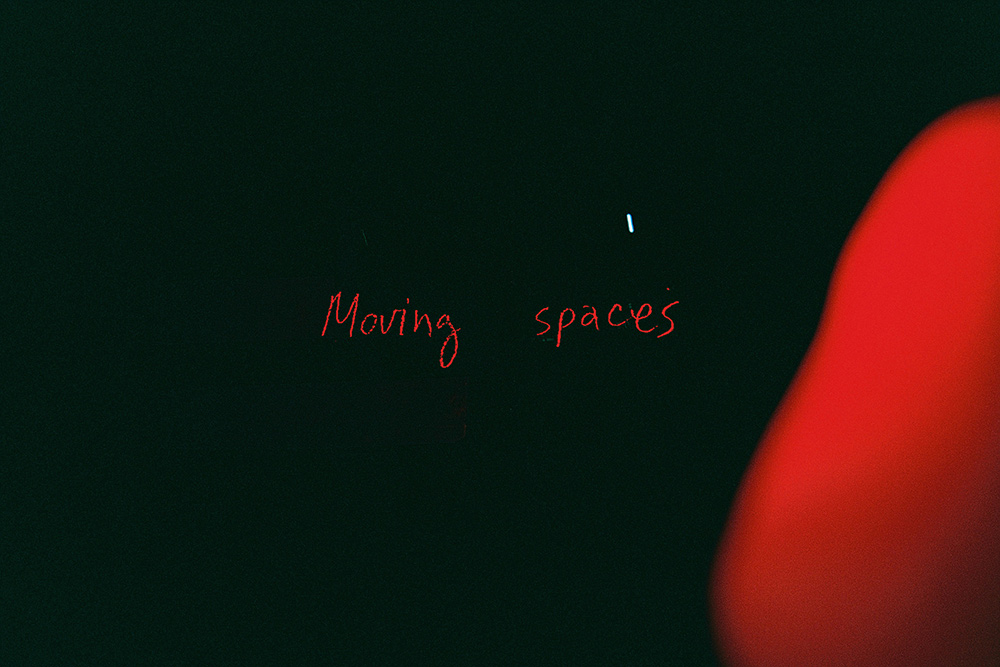 In his works, Pavle Banović deals with issues of identity, social conditioning and social patterns. He illuminates these topics through different, marginalized views and tries to change the dominant view with different approaches. His purpose is not to moralize or convey truth. He is aware of the inherent bias of personal beliefs and the conditionality of objectivity, but nevertheless wants to broaden the given frameworks through works of art. He creates in the field of photography, video, performance and actions, but he is also active in the field of drawing and creating Artist Books.

The Artist Book Moving Spaces (2019) bears the same title as the exhibition itself. It brings the author’s photographs with added written texts. The photos equally treat small, accidental and insignificant details of everyday life and semantically suggestive shots, where we see a passport, photos for an identity document and small note with a queue number in the sector for administrative internal affairs (Administrative Unit Ljubljana). Documenting everyday life records various mental states, situations and thoughts that the author intimately experiences, and at the same time he connects them to broader social issues. The work Turn down your photos opacity and look behind them (2020) consists of three triptychs of drawings on paper. The author drew on photographs and images from postcards from his personal collection. In the process of transferring, the original images become virtually unrecognizable. Most of them look like negative photos, the details are not visible, only white silhouettes remain on a dark background, like a bad photocopy. Each image is accompanied by text describing the personal experience associated with it. The context becomes more explicit when we read the text next to a drawing made after a postcard with a photograph of two men kissing, which the author received as a gift. Among other things, he writes: … It was a mark of identity I was given; it was a sign how others will perceive me forever. At the time I didn’t know what this thing meant. Two men kissing on a postcard made me happy. Now this ambiguity scares me. … In all cases, the text tells how the image was created or came into the personal archive, it speaks about the event that accompanies it and about the reflection with which it connects it. Past events and situations that we treat as accidental may, in retrospect, seem to be key moments in which our identity was formed. Images have the power to evoke memories, carry promises that will not be fulfilled, and open challenging questions we don’t know we will face in the future. Sometimes they seem more real than reality itself.

Pavle Banović addresses many topics in his projects, primarily dealing with his own identity and the environment in which he lives. He is interested in geographical determination, limitation, daily movement, routine dictated by social rules and norms, the feeling of anxiety he experiences when people are calmed by borders while they frighten him, the stereotyping he observes and feels in his generation, the country he comes from… These are the things that constantly accompany him.

Pavle Banović (1998, Belgrade, Serbia) lives and studies in Belgrade, at the New Media Department at the Academy of Fine Arts. He is the recipient of the Telekom Award for the best student work in the New Media Department (2019). He has participated in group exhibitions of the Goethe Institute, Leaving the safe regime (2018), Crowd in the city in the City Gallery in Belgrade (2019), and Hard pressed in KC Magacin in Belgrade (2020). His work stood out at the final exhibition of the Academy of Fine Arts and Design in Ljubljana in 2020. Pavle Banović was in Ljubljana on a student exchange programme.