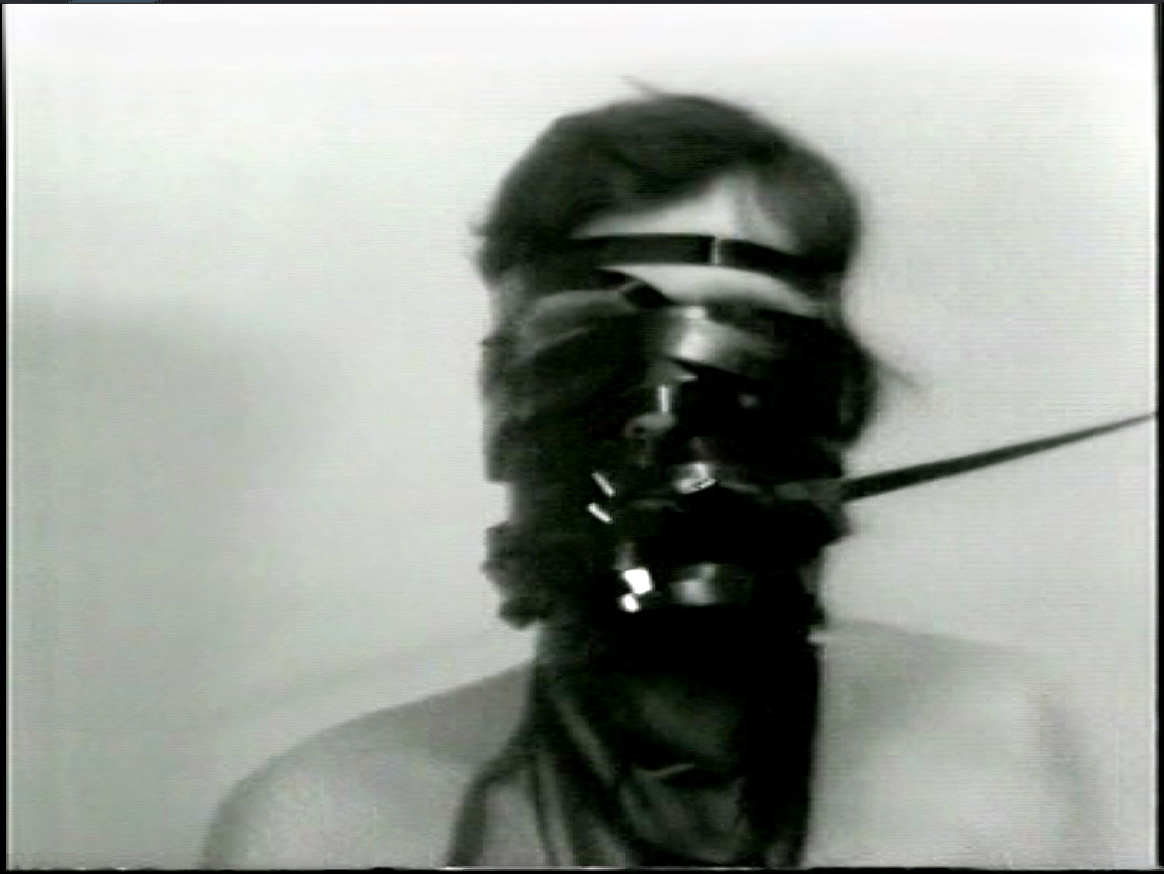 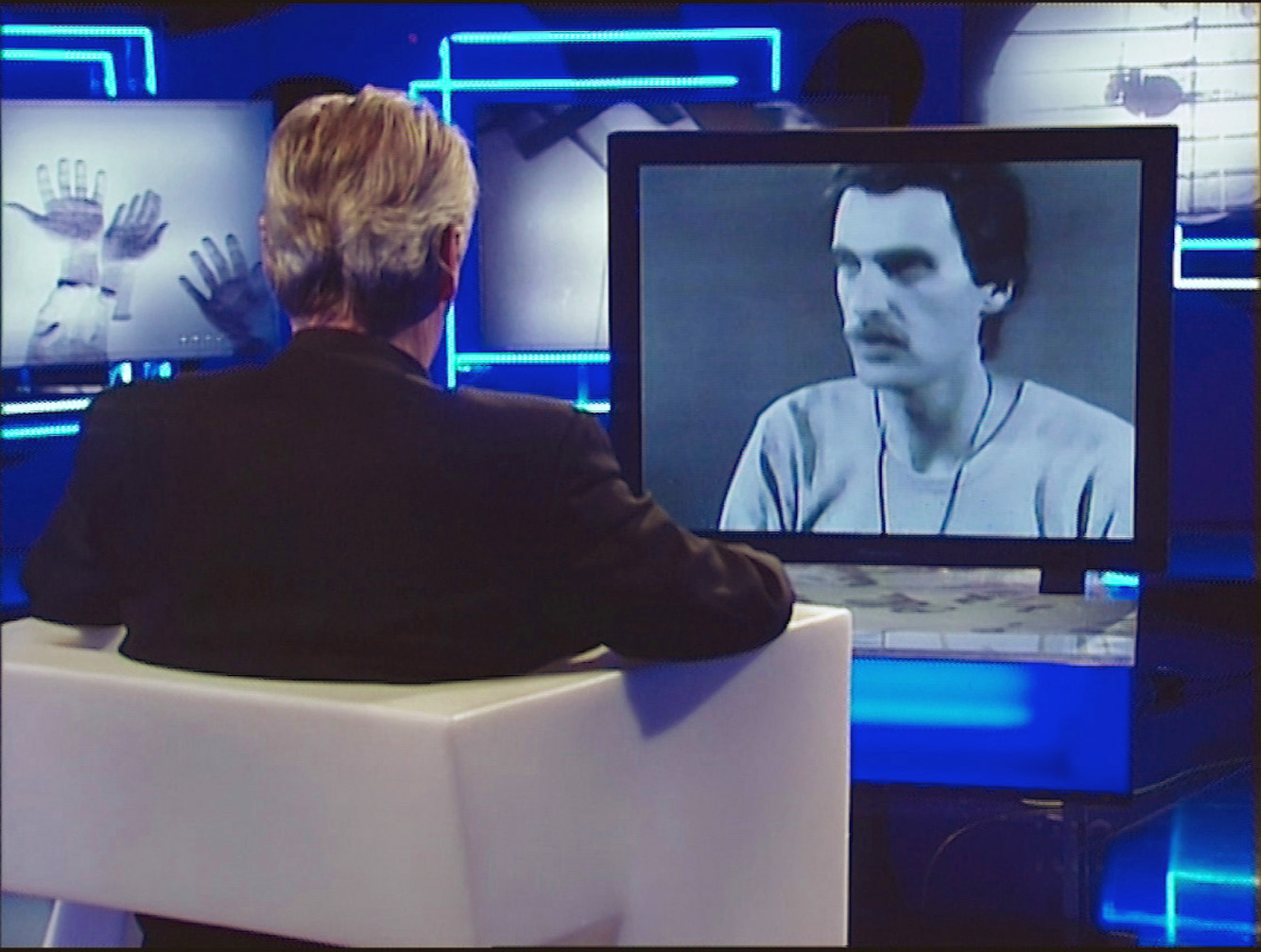 You are cordially invited to the opening of the exhibition P74 KINO: Dalibor Martinis on Wednesday, 5 June 2019 at 7pm at the P74 Gallery in Ljubljana.

Dalibor Martinis began his conceptualistic artistic creativity in the late sixties and early seventies. He experienced the initiation of his video practice in the framework of the international biennial Trigon 1973 (similarly as Sanja Iveković, Boris Bućan, Goran Trbuljak). Video then was not just a new medium, but a global artistic movement that expanded its expressive possibilities, connected the physical and the conceptual, explored the body of the artist, etc. Why is its artistic production so exciting, intriguing and provocative? Probably because it uses the subtle forms of diversion of the medium itself (Nada Beroš) and not its effects just for their own sake. It confronts the viewer with contradictions that are immanent to art, draws attention to the boundary created by the author’s entrance into the very medium structure. At the same time, it is aware that the art mediums are simply not enough, and therefore it uses the strategy of critical intervention and the conceptualization of the visible and the imagined.

P74 KINO Unstable images, unstable times brings the selection of author’s seven video works from the period of four decades. Video Open Reel (1976) is a video performance that represents the early experimental phase of the artist’s creativity. Here the artist is at the same time the object and subject of the video work. The viewer follows the winding of the video tape around the artist’s head (on the tape there are videos of the artist winding his head in the video tape) until it is completely swathed. If in the first video works, the identity of the author is deliberately concealed, or the author does not appear in the shot with his face, the video DM 1978 Talks to DM 2010 is their exact opposite. It was created as a fictional TV interview by the artist with himself. In 1978, in a performance in the Western Front Art Centre in Vancouver, Canada, he asked himself a series of questions in front of live audience, and after 32 years he answered them in TV program Another Format on Croatian Television. This time, the emphasis was put on author, movement and time travel. Video We the People (2013) is a film contemplation on the nature of society and the individual in it, created from the excerpts from famous movies and the derivations from the texts of the situationist Guy Debord. Video Odessa/Stairs/1925/2014 (2014) uses the famous scene of the Odessa’s stairs from the cult movie The Battleship Potemkin by Sergei Eisenstein. But this time, the events are projected onto the actual staircase and intertwined with the real sounds from the footages on YouTube published by participants of the events in the Ukrainian Odessa in April 2014. We conclude with the interactive installation Coma (1996), one of his most popular works with which he also participated at the Venice Biennale in 1997. Here, the viewer is put in a specific role: in the role of the judge and the executer. We can interpret this work as questioning the boundaries of sadism, lust, and death.

Dalibor Martinis graduated from the Academy of Fine Arts in Zagreb. He has been exhibiting since 1969. Between 1987 and 1991, he lectured on video and television directing at the Film Department of the Academy of Drama Art in Zagreb, and between 2007 and 2012 at the Academy of Applied Arts of the University of Rijeka. Between 1991 and 1992, he lectured as a visiting professor at the Ontario College of Art in Toronto. In 1993, he founded Multimedia Lab for the development of multimedia software. His conceptualistic and media artistic opus is extensive and diverse. In his works, Martinis deals with the problem of communication in society and in the public space, with history and public memory, with strategies of metapolitical action, relationships between the physical and the virtual, etc. He has participated in many of the world’s most important manifestations of contemporary art, such as Sao Paolo Biennale, Documenta, Venice Biennale, at The Museum of Modern Art in New York, Stedelijk Museum, The Museum of Contemporary Art in Zagreb, and besides that at many of the most important film and video festivals, for example in Oberhausen, Berlin, Tokyo, Montreal, San Francisco, Locarno. Dalibor Martinis was awarded with several international awards, and his works are placed in the most important international collections of contemporary art.

What is the meaning and the purpose of the “people” in the movies? Do they populate the streets, buses and trains, restaurants and the dance halls, just so that the movie characters could feel “normal”? What would the movie reality look like if the heroes would be erased and they would be its only inhabitants? The film is a sort of metapolitical contemplation (using excerpts from famous movies and derivations from Guy Debord’s texts) on the nature and “social” position of masses of individuals without individuality who surround the movie heroes, the only ones allowed to feel, suffer, or enjoy in the drama of life on film.

Images from the famous scene The Odessa stairs from the silent film Battleship Potemkin by Soviet director Sergei Eisenstein (1925) showing the events which anticipated the October revolution are projected onto an actual staircase and confronted with actual sounds taken from clips shared on YouTube by participants in the events in Odessa, Ukraine, in April 2014. While the spectacular film images are projected on an actual staircase forming a constructivist composition, the actual dramatic sounds from the recent Odessa events are merged with such film images. Was Karl Marx right when he stated that history repeats itself, first as tragedy, then as farce?

Film without Film was recorded on 17th of June 2014 in Municipal State Attorney’s Office in Split. In the movie Film Without Film Dalibor Martinis testifies in his defense about the events that led to the not-showing of the film Z1,0339 which he made in 2013.The verbal description of the movie and his own artistic procedure that Dalibor Martinis gives in front of the deputy state attorney is a substitute for the movie Z1,0339 which the author must not show. The film without film is still a film, and the circumstances that made its screening impossible, and brought his author to the unpleasant and sad situation now become its structural part. At the same time Film Without Film is an official court document. What I am saying is truth and nothing but the truth.

The author is balancing a video camera on a tripod the top of which is poised in the palm of his hand. The lens of the camera is directed downwards so that it acts the part of witness and hostage of the action at the same time. Although the camera, together with the hand holding it, is constantly moving, it is seemingly staying still, and the floor the author is standing on appears to be sliding away. The video lasts as long as the artist retains the control over the equilibrium of the camera.

An observer-cum-executor wakens the sleeper on the screen by the push of a button, which provokes an electric shock (demonstrated by a flash of lightning and a roll of thunder) produced directly from a computer disk, thereby bringing him back from the separate world into a world of common torture*. Awake, the sleeper begins reading the Latin text of Plinii Naturalis Historia, which contains all the knowledge that the world of Antiquity possessed about the cosmos, planets, forces and natural elements. A monotonous litany seems to make its reader so weary that at one point he slips into a deep sleep, a sort of coma. The body has crossed the dividing line. The territory of the body has become a non-place. What is more painful: a dream resembling unconsciousness, or awakening? Dare we remain indifferent? Is it at all possible to separate a subject from an object, one from the other?
(Nada Beroš)
*In Dr. Stanley Milgram’s famous electroshock experiments in the 1960’s, participants delivered what they thought were punishing electric jolts to a fellow citizen, merely because they were encouraged to do so by an authority figure as part of a learning experiment.

A camera on a tripod is connected with a video-recorder. The artist is sitting in front of the camera. After starting the recorder, he gathers up the video-tape uncoiling from the first reel and passing through the magnetic head, and instead of coiling it on the second reel he winds it around his head, turning around on his chair. In the end his face is completely swathed in video-tape on which his face is recorded over which is coiled the video-tape on which his face is recorded over which … As we watch the video tape covering artist’s head what we see is actually the film Open Reel because on that videotape the whole film is/was recorded (and reproduced). The “then” of the performance and the “now” of watching it are one and the same. So, we see Open Reel two times simultaneously.