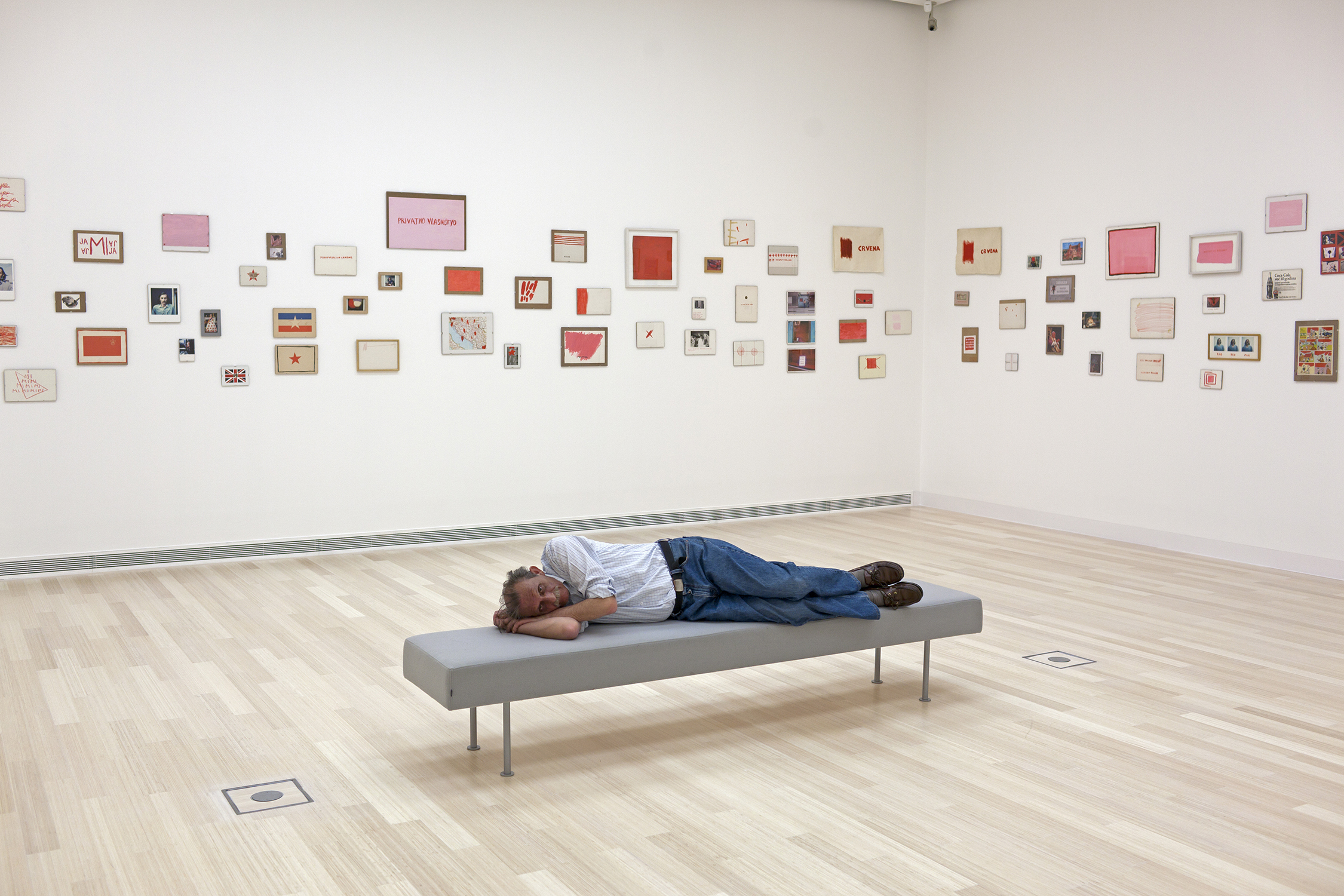 Forty-one years after Stilinović’s solo exhibition Sing! at the Gallery of Contemporary Art in Zagreb, we are reconstructing two of his works that should have been performed there in 1980. As stated on the list of exhibited works, it was two ambientes: Red, measuring 518 x 342 x 270 cm, and Pink, measuring 534 x 380 x 270 cm. There are no photographs of these works in the catalogue that was available at the exhibition opening, but it contains pieces of red and pink synthetic satin fabric which was supposed to cover the walls. The artist also added a few lines in order to contextualize the work in his field of interest: “reflections on colour – the meaning of the relationship between colour and material – colour as sensation – colour as symbol.” In the foreword to the exhibition, curator David Matičević writes:

“Reflections on Colour is a theme Stilinović exploited in some of his best earlier works, but he now uses it on a quite different scale. Though fondest of small formats, here he fills a specially designed space with reds and pinks. The effect is achieved not only through the visual sensation but also, and even more importantly, through the casual link of the two colours and their glorification to the degree of banality. Using a cheap but striking fabric, the glossy and shining synthetic satin, he has come close to objects that have the status of symbols – for instance, flags or the curtain of a provincial theatre. A potential interpretation reveals the colour pink to be washed out or softened red – softened in order to achieve likeability and enticement, but the loss of intensity is accompanied by a loss of meaning.”

However, these works were never realized, most likely due to a lack of funds, and perhaps also because the institution was reluctant to fully support the artist.

Stilinović’s artistic production at that time was mostly articulated around the relationship between ideology and the man who defies it. In the series of works Red – Pink, which were created during the second half of the 1970s and consisted of many collages, texts, photographs, a few objects, ambiences and actions, the artist perceives colours as ideological signs and analyses the duality (truthfulness and falsity) of linguistic expressions. The communist red harnessed the entire range of meanings of the colour red and standardized the red star, red flag, “red thread of revolution”, becoming the official colour of the communist ideology. Insisting on the “normal”, deideologized use of the colour, which he elaborates on in his text “Consumption of Red-Pink” (published in the handmade catalogue of his exhibition at Podrum in 1979), he aims to desymbolize red, to reduce it to only a colour by incorporating it into different works and materials. “Thus, the effort, if one wishes to interpret the image properly, consists of erasing one’s knowledge, not affirming it. Should one attempt to read the work through the knowledge about this colour, what ensues is an absurd reading. Since we cannot hide our knowledge, these works are read as symbols and as desymbols.” Here, a mawkish rococo pink is ideologically opposed to red; “bourgeois” versus “revolutionary”.

The space of the Contemporary Art Gallery was sunlit and bright, much like the P74 Gallery, so the ambiences radiates colours with full intensity. The colours’ primary properties could imply their material autonomy, which is highly unlikely if one is familiar with Stilinović’s other works. For years, he researched the identity of pink and red in word, material and image. And he called it all into question. Ideology was ubiquitous and the artist played many games with it.

Branka Stipančić is an art historian, curator and editor based in Zagreb. She worked as a curator at the Gallery of Contemporary Art (today: Museum of Contemporary Art, MSU), then she was the director of SCCA, and for the last 20 years she has been working as a freelance curator. When she is not preparing exhibitions – she writes, edit and publish books and catalogues. Since 2004 she has been working with a group of curators on Kontakt The Art Collection, Vienna.