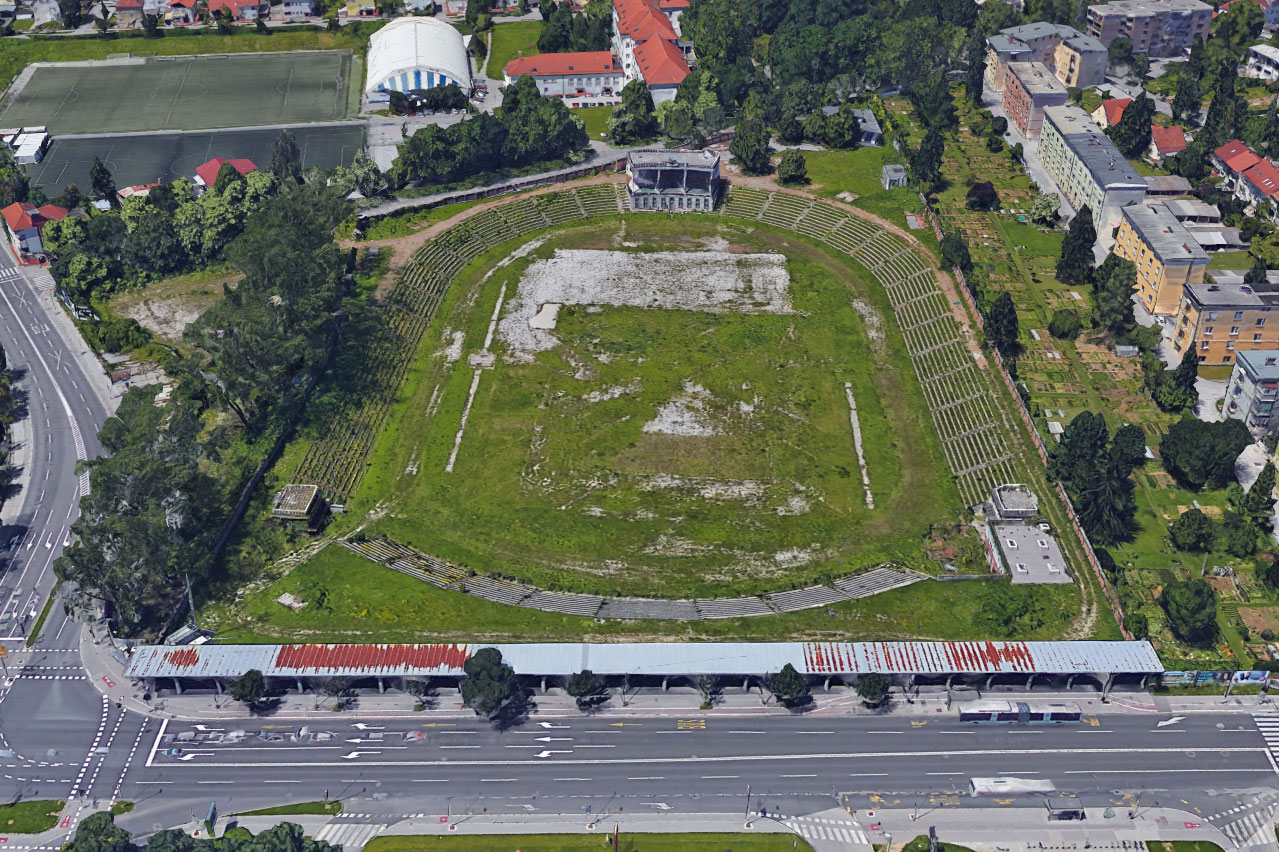 Orlovski Stadium, later known as the Central Stadium, was built for the needs of the gymnastics society of the Slovenian Christian-Social Association Orli (Eagles). The initial architectural design by Jože Plečnik was finalized in 1923 by his student, Ivan Pengov. Construction proceeded gradually and slowly, first due to lack of funds and then also for political reasons (dissolution of all gymnastics societies in 1929, World War II). The stadium was not fully built until after the war. In 2008, it was closed due to its dilapidation, and a year later it was declared a monument of national importance. At that time, more intensive reconstruction planning began, but has not been realized to this day. In the project Remembering and Forgetting, Jože Barši deals with the issue of heritage as an artist, architect and citizen. How to deal with it? How to approach it? What would be the optimal solution to this complex problem?

The exhibition reveals documentary material and objects from his personal archive – prints of newspaper articles, photographs, books and texts that highlight and illuminate various sides and contents in direct or indirect connection to the Stadium. The Stadium lives in memory as a venue for football matches and concerts, but was not originally designed for these purposes at all. The Eucharistic Congress (1935) and the oath of the Home Guard under the leadership of General Leon Rupnik took place here just before the end of the war. The current image of the Stadium shows a state of neglect. After more than ten years of panels, public debates and expert consultations, the territory appropriated by man has been overgrown with nature, living among the remnants of history. Remembering involves emotional charge, including nostalgia, and is at the same time most often a necessary part of learning. Jože Barši sees a specific beauty in the overgrown areas of the Bežigrad Stadium. He suggests that the owners could build freely around the stadium, but keep the interior wild, overgrown, involving minimal restoration work.

Duality is a word that stands out distinctly alongside the theme the author deals with when talking about renewal and the future, about the events that happened there, the people who were involved. Just as remembering is important, so is forgetting. In the context of the stadium, Jože Barši sees forgetting as a quality, and proposes the preservation of the overgrown state as a kind of monument to forgetting. Leaving the state as it is, however, is not a romantic return to nature. It is rather about exposing the fact that the belief in the eternity of things and control over reality is an illusion. Undoubtedly, we live in a time when the latter has become particularly evident.

Jože Barši (1955) graduated from the Faculty of Civil and Geodetic Engineering (architecture) and the Academy of Fine Arts and Design (sculpture), where he also completed his specialization. His work encompasses diverse areas of interest, from site-specific works to radio broadcasting as an exhibition space, public lectures, sound and conceptual works. Since 1988, he has been teaching at the sculpture department of the Academy of Fine Arts and Design in Ljubljana, since 2006 as a full professor. He was a visiting professor at Indiana University of Pennsylvania, Indiana, Pennsylvania, USA (2001). He represented Slovenia at the Venice Biennale (1997), and exhibited at the 4th International Istanbul Biennale (1995). He is the recipient of the Golden Bird Award for Visual Arts (2010) and the Jakopič Award (2014).
He has participated in numerous international and domestic seminars, conferences, and exhibitions, such as Grammar of Freedom. Five lessons: Works from the Arteast 2000+ Collection, Garage Museum of Contemporary Art, Moscow (2015), 1 : 1, Stopover, international group exhibition, project and two public lectures, Museum of Contemporary Art, Metelkova, Ljubljana (2014), Jože Barši, A Retrospective, Museum of Contemporary Art Metelkova, Ljubljana (2013), The Present and Presence – Repetition 1 and 2, Museum of Contemporary Art Metelkova, Ljubljana (2012), and many others. Over the years, Jože Barši has given several public lectures and participated in several residencies abroad.