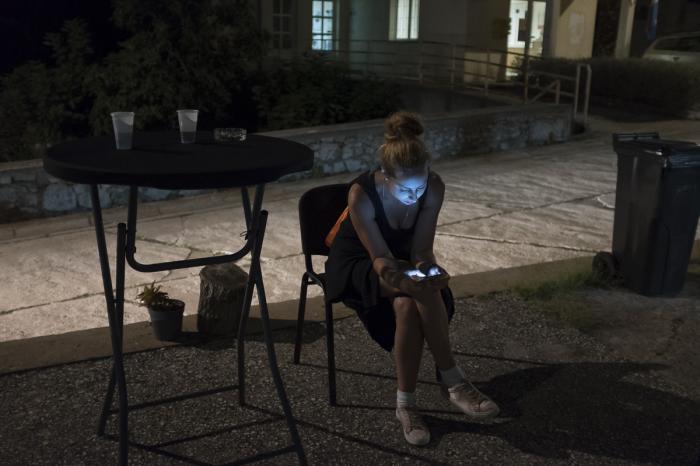 We are pleased to announce the first solo exhibition of Boris Cvjetanović Photographed and Illuminated in the P74 Gallery. The exhibition presents selected works from the series Hospital, Workers, Holidays, Mesnička 6, Prison (created between 1983 and 2005), and a new project, Illuminated.
The exhibition will be on view till 5 January 2022 at the usual opening hours of the Gallery (monday to friday, 12.00 to 18.00, extra viewings upon individual arrangement).

Boris Cvjetanović is one of the most prominent and interesting Croatian photographers of the recent decades. He is a sensitive chronicler of everyday life, recording its social and societal phenomena without pathos and drama. In the early 1980s, he created images of political graffiti, a series of images of demented, helpless and lonely people from hospitals, psychiatric hospitals, basement apartments, prisons, and for several weeks he resoundingly documented the Labin miners’ strike. He’s revealed the underworld where homeless people and addicts live. The focus was on maladjusted, castaway, neglected or handicapped people from the margins who were discarded by society. These scenes are depicted without drama or voyeurism. The protagonists often look directly into the camera and are aware that they are being photographed. In these series, Boris Cvjetanović shows great respect for the subjects of his work.

The city also plays an important role in Cvjetanović’s artistic opus. He is interested in urban everyday life, its post-socialist, post-industrial transformation. The city is a topic for his sociological, historical, architectural or political research. We often don’t see people in the images of the city, but only the consequences of their actions. Such a portrait of the city could only be created by someone who closely monitors and observes it in depth.

Persons or objects illuminated by lights are said to be illuminated. In Boris Cvjetanović’s new series, Illuminated, we observe selected individuals in the yard, in the room, in the bar. They are immersed in the screen and illuminated with blue light. They differ in their expressions, actions, juxtapositions chosen by the photographer, but the focus is clear. Are they present? Are they absent?

Boris Cvjetanović (1953) graduated from the High School of Applied Arts and in 1976 graduated from the Fine Arts Department of the Pedagogical Academy in Zagreb. Between 1976 and 1984 he worked as a restoration sculptor at the Croatian Restoration Institute. He’s been working professionally in photography since 1984. In 2007, he joined the Academy of Fine Arts as a lecturer in photography. He has participated in numerous solo and group exhibitions at home and abroad, in Europe, the USA, Japan and Australia. In 2003, he represented Croatia at the 50th Venice Biennale of Contemporary Art together with Ana Opalić. Boris Cvjetanović is the recipient of several prestigious awards such as the 1st Tokyo International Photo Biennale award, the 1997 Croatian Photography exhibition Grand Prix, the 1997 Homo Volans Award, etc. In 1996, he published a book of photographs, Prizori bez značenja (Scenes Without Significance). His works are present in many world art collections.

Attending the exhibition is permitted only with a negative PCR or RAT test result or a medical certificate of recovery or vaccination.